Pittsburgh Public Transit Gets a FaceLyft 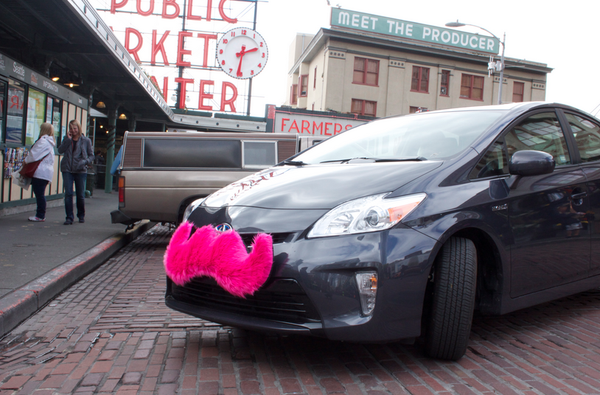 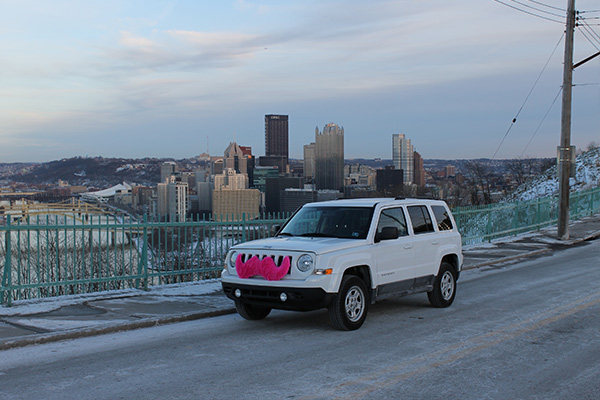 I Mustache You A Question

DECO’s Facilitator & Design Officer, Mary Sullivan, recently used Lyft, Pittsburgh’s newest public transportation option. Lyft is a San Fransico-based ride-sharing service that uses an app to connect drivers with people who need a lift. (Hence the name, get it?) The company has made innovative changes to the traditional taxi service by using a mobile app to connect riders with drivers in the area. The drivers use their own car and can be compensated considerably more than a traditional taxi driver. A February 6th Post-Gazette article describes how the service is coming under scrutiny from the Pennsylvania Public Utility Commission for pushing the envelope on this service, which is a hybrid between carpooling and the traditional taxi.

DECO  How was your first ride?

MARY “It was good. The girl was cool.”

DECO So your driver was cool?

DECO Did you expect a female driver?

MARY “I knew I would have a female driver and what she would look like and what car she would be driving as soon as I got the confirmation for the ride on the Lyft app. It showed me  a picture of her, her car, her location, and how long it would take her to get where I was. It’s a really well-developed app.”

DECO What was the first thing that you noticed that was different from a regular taxi?

MARY “Well, I sat up front and was greeted with a fist-bump instead of a ‘Hi, how are you?'”

DECO So the experience was much more…

MARY “Enjoyable. It was a friendly environment.”

DECO Is it more expensive than a regular taxi?

MARY “It was a little bit, my trip was anyways.”

DECO How far were you going?

MARY “From PNC Park to Riverview Park in the Northside. It’s about 2.5 miles and it cost $11. I’ve made the same trip through Yellow Cab and it was only $8.”

DECO Did you have to leave a tip?

DECO How much did you give?

MARY “Five dollars. Payment is all through the app on your phone.”

DECO How do you set up the payment?

MARY “You can link your debit or credit card to your profile on the app. The drivers don’t accept cash. They’re not allowed to.”

DECO Overall, it was a good experience and you would use it again?

DECO Do you have any horror stories from using the traditional cab services in Pittsburgh.

MARY “Plenty. There have been at least ten times that I’ve requested a cab through Yellow Cab and none has ever showed up. It’s nice to have another option.”

According to Bizjournals: Mayor “Peduto announced his support of the new services and distributed a letter he sent to the state PUC (Public Utility Commission) requesting the regulatory agency to allow the new companies to operate legally within the state along with the city’s established cab services and largely unregulated jitney services.” To see how services like Lyft and another California-based company Uber work, DECO talked to Tom Williams, an independent contractor who is an approved driver for both Lyft and Uber.

What’s the Deal With The Pink Mustache?

Once a driver is approved by the company, he or she can get on the road and start driving. While the Big Pink Mustache is used to identify approved Lyft cars, they only get their ‘Stache’ after 30 rides with positive ratings. So don’t be alarmed if your driver appears pre-pubescent on the front. According to Williams, it’s what’s under the hood that counts.

When it comes to safety concerns, Williams said, “Anytime you let strangers in  your car, you have security issues. Lyft deals with this through user and driver ratings. The driver will rate their passengers and vice versa. Lyft asks drivers to keep a rating of about 80% or 4.5 stars.” Lyft also performs driving record and criminal background checks on anyone looking to drive for the company. Although drivers use their own car, it must be newer than 2003, clean, and in overall good condition.

Currently, payment for Lyft is entirely donation-based. Drivers get 80% of the suggested donation plus 100% of the tip. According to Williams, the tip maxes at 20 or 25%. Uber is a flat fare with no tip. The suggested donation is decided through a combination of mileage and time. When asked if Williams has had a rider not pay, he said “I haven’t had it happen to me, but I had a friend give a 20 minute ride to a woman who never paid. I think she didn’t know what she was doing. There are some things that need to be worked out [with the app]. I’ve heard the Lyft app is better than Uber.” When asked why he’s driving for both companies, Williams said that he wants to see which offers a better service to its’ customers before settling with one over the other.

Williams also said that ridership has appealed primarily to a younger crowd. He has seen “a lot of Carnegie Mellon students.” As with most technology-based companies, Lyft and Uber will have to connect with enough people over a social platform to grow their business or they will not succeed. The Lyft and Uber services appears to have reached an audience, but they are still far off from reaching the critical mass needed to become as ubiquitous as more traditional services like Pittsburgh Transportation Group’s Yellow Cab service.

All is Well That Ends Well