Urban biking is seen as a preferable mode of transportation for some people but it can also be seen as a near-certain trip to the local hospital for others. This post is geared (get it) towards people who might be less than confident on two wheels. As always, we welcome input on the topic and are happy to answer questions you might have. The greener benefits of biking are readily apparent: no motor (meaning no fuel or emissions), less weight on the road (resulting in lower impact), and personal fitness (improving public health). But with riders being exposed to heavy traffic and uneven terrain, how healthy is it really? Without a lot of experience, many people are intimidated by taking the bike to work or school in place of a car, bus, or another form of transportation.

Why DECO Advocates For Riding Bikes

Making biking safer and more accessible is good for the city. As People For Bikes puts it: “Bicycling Means Better Business.” The primary path (bike path?) toward achieving these goals is through advancements in biking infrastructure, including things like bike lanes, racks on buses, bike parking, or any physical improvement to the landscape that helps cyclists. Collectively, bike infrastructure can provide solutions to problems people may face when using a bicycle. For example, a bike lane that is separated from traffic, and hence protected, creates a route through the city for bikers of all experience levels from the bike messenger to a family with a wide range of skills. 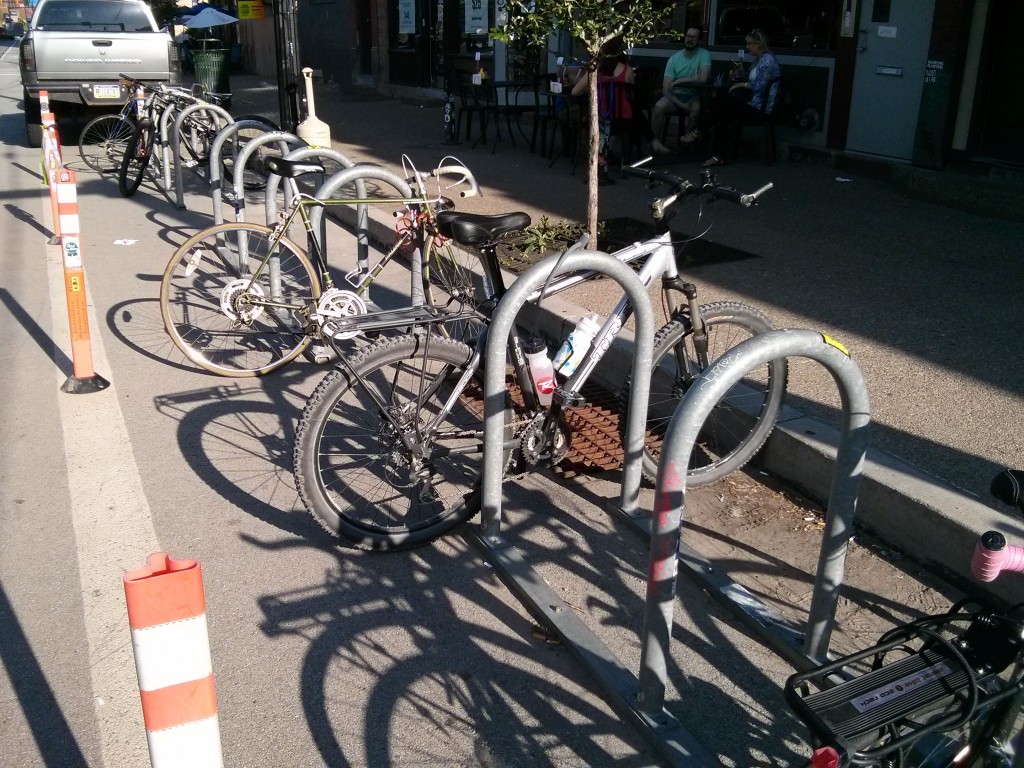 The first-ever bike corral in the city, located in front of OTB Bicycle Cafe in Southside

Along with only five other cities, the City of Pittsburgh recently announced that it would receive a $25,000 grant and an estimated $250,000 in related services from PeopleForBikes to install a protected bike lane in the city. This isn’t the only innovation. The city and Department of Public Works also completed the transition of Pocusset Street between Squirrel Hill and Greenfield into a non-motor vehicle street.  According to Bike Pgh!, this so-called “road shift” is “possibly the first example in the country of a city shutting a length of street down for cars, investing in new, safe, bicycle & pedestrian infrastructure, and re-opening/maintaining it for pedestrian/bicycle use only.”

When the city takes actions like installing the painted sharrows (see picture below), on-street bike lanes, and protected lanes, it not only encourages people to use their bicycles but it also makes it safer for our city residents to use their bikes instead of their cars. Less cars means fewer emmissions and better air quality in addition to less road congestion and higher productivity.

The first example in the country of a city shutting a length of street down for cars, investing in new, safe, bicycle & pedestrian infrastructure A sharrow, or bike/car sharing lane, on Dobson Street in Polish Hill These items are part of how DECO is helping businesses empower employees to find more effective methods of transportation to and from work. Bicycling offers a fun and rewarding commute and pastime, both of which are made better with improved infrastructure. More information on the connection between biking and wellness can be found at Fittsburgh. You can also read up on urban biking in Bike Pgh’s online guide.